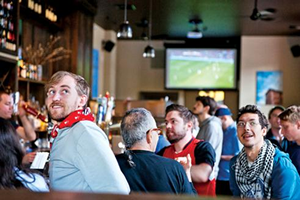 Looking to hang with fellow Kopites at this weekend’s Liverpool match? Or maybe you bleed sky blue and want to be surrounded by Man City faithful? Whichever English Premiere League side you support, there’s a spot to watch them shoulder-to-shoulder with like-minded loyalists.

Futbol NYC is putting together the definitive bar guide to English Premiere League action throughout New York City. Rather than rely on Google, we want to crowdsource the compendium with tips from real fans—like you!

We jumpstarted the list with hot spots for some of EPL’s most popular clubs. Lower-ranking teams are proving more of a challenge, so if you’re a fan of, say, Fulham or Cardiff City, let us know the best place to watch the lads stave off relegation.

We’ll also build out the guide with additional picks throughout the five boroughs for top clubs with established fan bases. And stay tuned for similar meet-ups to the Bundesliga, La Liga, and other premier leagues from around the globe.

Arsenal
The Blind Pig
233 East 14th Street, Manhattan
212-209-1573
Gooners gather at this East Village watering hole, home of the official supporter club of Arsenal FC, and widely considered the best place away from Highbury to watch a match. Afterward, soak up the suds with some hearty pub grub, like the loaded mac ‘n cheese or pulled pork flatbread.

Chelsea
Football Factory at Legends
6 West 33rd Street, Manhattan
Legends isn’t strictly for Chelsea—the website actually lists more than 30 supporters groups—but the NY Blues are the staunchest of the lot, so if Chelsea is playing, you can bet that most of the 20 big screens will be showing the match.

Everton
Turnmill Bar
119 East 27th Street, Manhattan
646-524-6060
For years, New York City Evertonians flocked to Mr. Dennehy’s, an Irish pub in Greenwich Village, but it poured its last pint in the spring of 2018. Nowadays, supporters of the Toffees head for the Turnmill, a casual sports bar with standard grub in Manhattan’s Flatiron District.

Liverpool
The Monro Pub
481 5th Avenue, Brooklyn
718-499-2005
Vinny, who owns the Monro with his wife Nicole, is a true souser and named the place after his favorite local in Liverpool. Reds come from far and wide to watch the match, nosh on traditional fare, including steak and cheese pie, washed down with a pint.

Manchester City
Mad Hatter
360 3rd Avenue, Manhattan
212-696-2122
A Citizens wonderland, this Murray Hill local is the official home of Manchester City Football Club Fans and Supporters in New York. The bar menu features all the flavors of home, including bangers ‘n mash and beer battered cod. And the patio out back provides glimpses of blue sky for the sky blue faithful.

Manchester United
Smithfield Hall
138 West 25th Street, Manhattan
212-929-9677
Located a few blocks from Madison Square Garden, Smithfield Hall doesn’t discriminate against other sports, but if Man U is playing, you can bet the place will be awash in red. Members of One United USA, the team’s biggest supporter club this side of the Atlantic, are even treated to a 10-percent discount on food and drink.

Tottenham
Banter Bar (pictured above)
132 Havemeyer Street, Brooklyn
718-599-5200
When the Spurs are on, the COYS ring out from this Euro-style pub in the heart of Williamsburg. The rotating selection of 24 taps will please craft brew enthusiasts, though the $3 Carlsberg is the lager of choice for those wearing lilywhite. Doors open fifteen minutes before all English Premier League matches, whatever the hour.