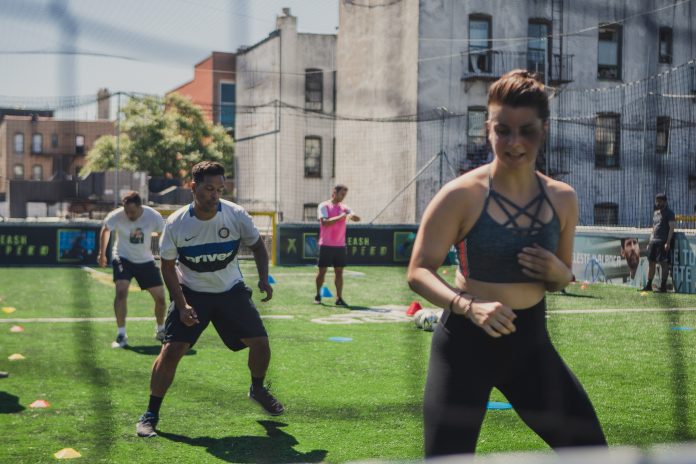 About a year ago, I found myself thirty pounds overweight and, as a result, woefully unable to keep up with younger, fitter players on the pitch. Deciding enough was enough, I embarked on a soccer-based fitness program, which included intensive training with a professional coach, Stephen Hoogerwerf, who I knew from pickup play in Brooklyn.

At first, it was just the two of us, but other ballers soon joined in, often half a dozen or more. Coach Hoog, who is the Director of Coaching at Chelsea Piers Soccer Club and Head Soccer Coach at the Collegiate School in Manhattan, took us through a series of drills and small-sided games focused on agility, endurance, speed, technique, and fitness.

I thought our group sessions were unique, but it turns out that adult soccer class is a big and growing trend, in New York City and around the country. It’s part of the larger movement around group training, which was second only to high-intensity interval training on the American College of Sports Medicine’s list of top fitness trends for 2018.

“It’s the idea of game-ified fitness,” says Jonathan Borrajo, a member of the New York Cosmos and co-founder and NYC Director of SoccerShape, which started offering adult soccer classes at the Upper 90 facility in Astoria, Queens in the spring of 2018. “Grown-ups enjoy laughing and having a good time during their workouts as much as kids.”

Spin classes and running clubs are common examples of group training, which is designed to create a sense of community and comradery that keeps members engaged and motivated. But soccer is getting in on the act.

Here are a few options to choose from:

SoccerShape
Started in Miami in 2017 by Borrajo and two of his then teammates at Miami FC, the SoccerShape program is based on dynamic movements, speed improvement, cardio progression, and, of course, soccer skills. All coaches play at the professional level, which makes for a pretty cool and unique experience. “SoccerShape is for adult players who may not be where they’d like to be in terms of fitness, or for those trying to get better technically for their league games,” says Borrajo. “We offer programs where they can work on both aspects—soccer and fitness—in a fun, supportive environment.” Following Borrajo’s move to the New York Cosmos in early 2018, SoccerShape started holding Sunday morning classes in Astoria; $20 for the hour-long workout. More classes are slated to open around the city in 2019.

Futbol Rebels
In partnership with NY COED Soccer, Futbol Rebels offers adult soccer classes at Manhattan’s Grand Street Mini Field, over by the Williamsburg Bridge. The program is soccer-centric, with sessions built around speed, agility, and quickness, plus a different skill each week, like dribbling, passing, and finishing. There’s one group for beginners and another for more advanced players. Pay $250 for 10 weeks or $30 drop-in.

SoccerBeyond
German-born Frank Hauser started SoccerBeyond to build community around the game of soccer. Lessons are competitively priced at $15 per session. Most are held at Pier 25 in Manhattan. In addition to drills and skills, each session includes an actual game of soccer. And there’s an opportunity to join one of the Beyond F.C. teams that play at all levels in and around NYC.

If you’re keen on getting in shape, upping your game, and making new friends along the way, check out one of these adult soccer classes. Speaking from experience, I promise it will deliver on all counts.