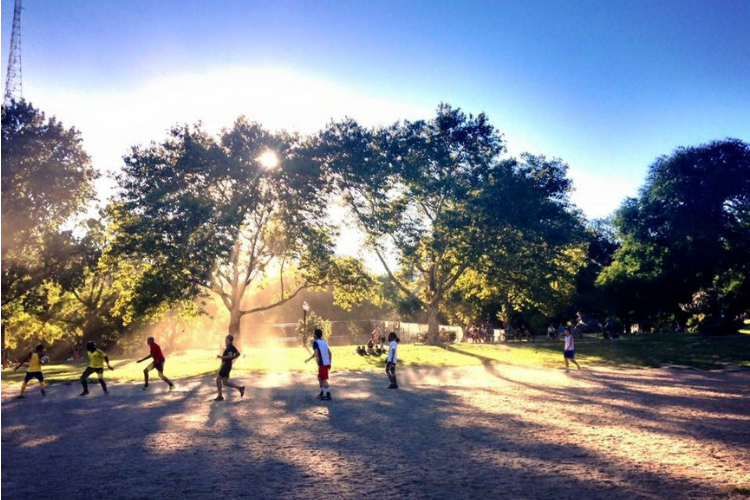 The city’s most populous borough is also home to some of its best pickup soccer, thanks to the abundance of players, pitches, and park space. Many Brooklyn games are open, though you’ll have to show up a few times before you’re treated as a regular. Others are strictly invite-only, usually a tight-knit crew that’s looking to maintain a certain standard of skill and temperament.

Besides the rules of entry, Brooklyn pickup matches vary by size, pitch quality, and player makeup. Open games tend to have a wider range of talent, from former Division I standouts to soccer newbies. That can make for some lopsided matches, but it also keeps the play interesting, since the team chemistry is different every time out.

The MeetUp app is a good place to search for pickup games at Brooklyn’s most popular soccer hubs, including Cadman Plaza, Brooklyn Bridge Park, and Bushwick Inlet Park (BIP). A friend of Futbol NYC’s from BIP’s First Touch FC game (below), built a website, Can I Kick It, with a curated list of open games in Brooklyn and beyond.

It always helps to know a player or two at a new game you’re looking to get in on. On the other hand, there’s something ballsy and badass about showing up to a pitch full of strangers and asking for a game. More often than not you’ll get in, and probably come away with a few new mates, especially if you help your side to victory.

Here’s a quick description of a couple of Futbol NYC’s favorite pickups. Got other recommendations? Let us know in the comments box below.

First Touch FC
Consistency is hard to come by in the world of NYC pickup soccer. Erratic start times, players flaking out, or some other activity occupying the field space can all make a game go bust. Not First Touch FC. Every Tuesday, Thursday, and Friday morning, anywhere from 20 to 60 players, depending on the season and the weather, gather at Bushwick Inlet Park in Williamsburg for an hour of hyper-organized footie. (In summer, the game moves to nearby McCarren Park.)

Credit Kyle McDonald, who founded First Touch FC in 2012, with the game’s punctuality. “We’ve always just tried to keep it simple,” says the 39-year-old creative director and Michigan native, who moved to New York City a decade ago after living, skateboarding, and studying design in San Francisco. “People know to show up by 7:00 if they want a game. We count off the teams, pass out the pinnies, and go.” As promptly as play begins, it ends precisely an hour later with the cry of “last play,” good for ballers who need to get to work.

First Touch FC has more than 3,500 members on MeetUp, maybe 100 of whom can be counted on to show up at least once a week. A $3 match fee covers the cost of permits and equipment. When the weather’s right and schedules align, the numbers might be enough for three separate games—and some of the finest footie in Brooklyn.

Fort Greene Football Club
The best pickup soccer is all about community. No game embodies this better than Fort Greene Soccer Club, which has been going for decades on the dirt pitch (a.k.a. the “dust bowl”) in the heart of Brooklyn’s Fort Greene Park.

Itai Gruss, a 26-year-old operations manager who grew up across the street, used to watch his father play the dust bowl, before joining himself as a teen. “The park was a scary place back then,” he says. “But whenever a game was going on, everybody felt safe.”

FGFC plays most weekend afternoons, with start times varying by season; 2pm-ish during the dark winter months and around 6pm in the summer. The ever-changing schedule is a quirk of the game that takes some getting used to. 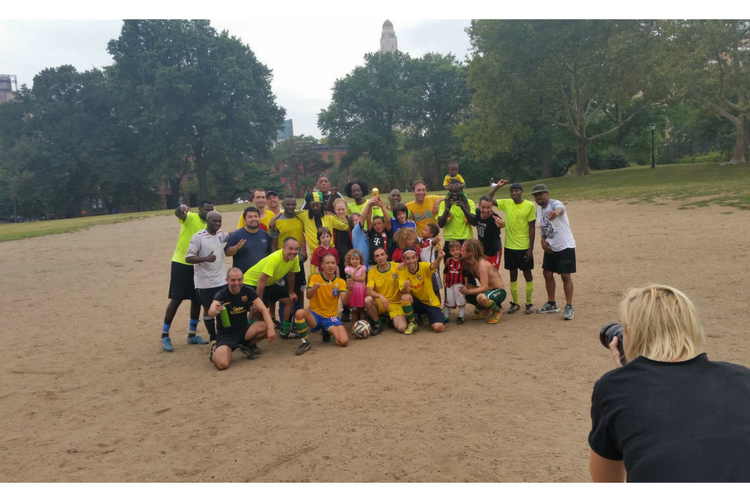 From the outside, the action looks rough and tumble, and the rocky pitch isn’t exactly inviting. But ballers with a passion for the sport are welcomed with open arms, if also the occasional elbow. The game reflects the diversity of its surrounding community. Five continents might be represented on a single side—maybe players from Japan, Morocco, France, Colombia, and Jamaica, their respective styles meshing in multicultural brilliance.

If there are enough players for three or more teams, it’s always winners-stay-on, which stokes the competitive fires, and tempers too. But no matter how heated the play might get, matches always end in a handshake, and maybe a barbecue or house party to follow.