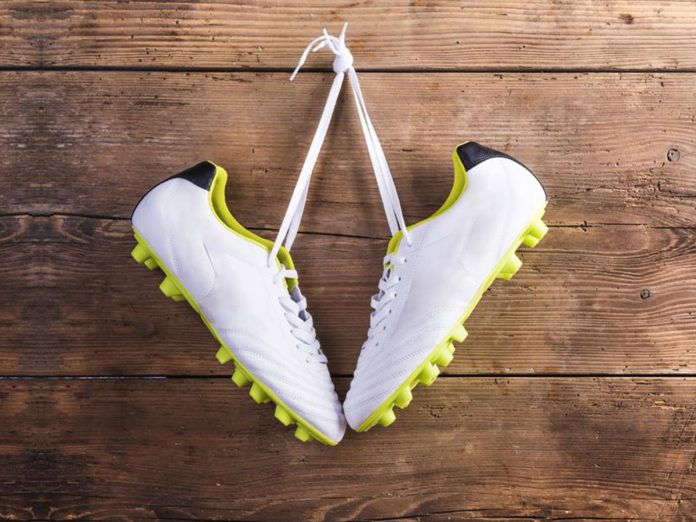 Futbol NYC set out to answer that question by surveying as many ballers as possible in and around the five boroughs, from the dirt pitches of Brooklyn to turf fields of Manhattan to hard surfaces throughout Queens. We even ventured over the border to Jersey find out what ballers there are donning these days.

I worked for ten years at Consumer Reports, so I love a good survey story—not that our informal canvassing meets that organization’s high standards of statistical excellence. The reason why gets wonky fast, but in short, survey rigor comes down to two things: sample size and sample framing. We asked more than 100 players about their shoe preferences, which is a decent sample size (even a sample of 50 can be considered statistically significant by data scientists). Our framing, however, was a little soft, since the ballers were primarily from soccer games we play in, which makes it too self-selecting. For a survey to be truly representative, the sample needs to be drawn from a random sample of the population, says my former CR colleague Donato Vaccaro, Ph.D., now with the research institute NORC, at the University of Chicago.

And so, to borrow a line from WNYC’s Brian Lehrer, we ended up with an informal, unofficial, thoroughly unscientific survey of the most popular soccer shoes in New York City. But if you’re in the market for new boots, or just curious about what’s out there, we think you’ll find it useful.

Clash of the titans
New York City, like much of the soccer world, is primarily a two-brand town. Of the 106 players we surveyed, 86 of them were wearing either Adidas or Nike. At 55 percent, Adidas has the largest market share, compared with 38 percent for Nike.

The two companies have so much influence over the retail channels that it’s tough for other brands to gain shelf space. We were chatting with a player who had on a pair of well-worn Pelé turf shoes that he loved, but that are now impossible to find. “I went back where I got this pair and the guy said that the big brands told him, ‘you sell the Pelés, you can’t sell us’.” Another baller, an expat from Britain, lamented the fact that he can’t get his hands on any Umbros, a favorite boot back home.

Of course, you can find other brands in New York, including Puma, Joma, and Diadora. But Adidas and Nike dominate the field. So which is the favorite?

And the winner is…
The two behemoths each had about half a dozen separate models come up in our survey. Out of that base, one clear winner emerged: the Adidas Mundial Team Turf, which 27 survey respondents were sporting. (Full disclosure: I’m a Mundial man myself and have been for as long as I can remember). 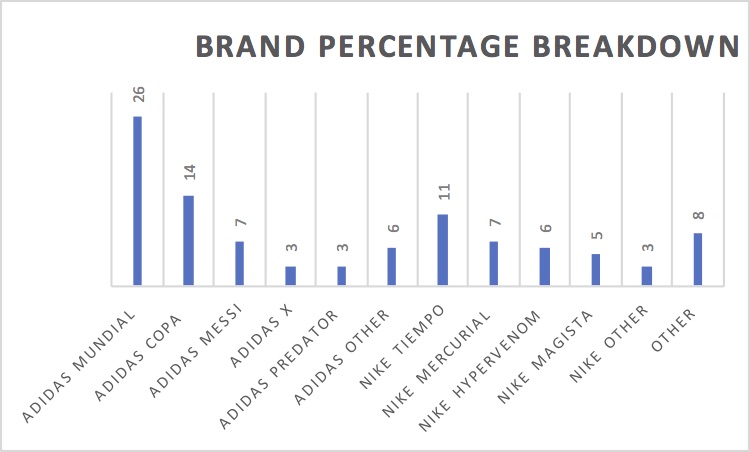 Most of the players we spoke to conceded that it’s not the flashiest shoe, but they described it as a solid, dependable boot with a comfortable, supportive fit. They had similar things to say about the Adidas Copa Mundial Cleat, another classic, and the number two vote getter in our survey. New York City is primarily a turf town, but players wearing Copas felt that the low molded studs offer solid traction on most synthetic surfaces, in addition to natural grass. And, of course, everyone gushed about the soft kangaroo leather, which sets this shoe apart from most of the pack.

Capturing the youth vote
While Adidas was tops in our survey, its demographic clearly skewed older. In fact, 80 percent of Mundial or Copa wearers were in the 35-and-up age bracket, and nearly every fiftysomething baller pledged allegiance to the old-school Adidas; many of the old boys lauded the shoe’s the firm construction, which provides much-needed stability for weak ankles, tight Achilles, and other ailments that arise from decades of play.

Not that no younger players were wearing Adidas, but the race with Nike got a lot tighter in the under-35 bracket. Case in point: roughly 60 percent of Nike Tiempo ballers were under 35; similar majorities emerged for the brand’s Mercurial, Magista, and Hypervenom lines. (Note: here’s where the self-selected sample size is statistically problematic. I’m 44. If a 24-year-old had conducted the survey, he or she would have probably engaged a younger sample base, which would have led to different results—more Mercurials, perhaps, and fewer Mundials). 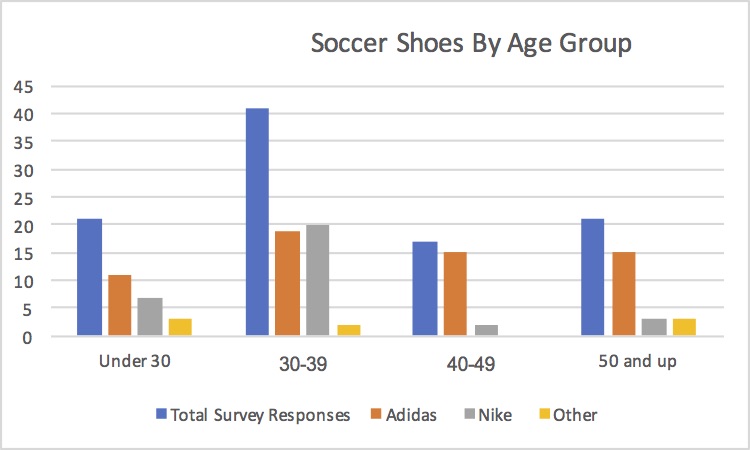 Nike fans generally liked their shoe’s lightweight design and quick break-in. They tended to be a more discerning lot as well. For example, more than one wearer of Nike Tiempo cleats was adamant that it’s the best shoe for synthetic turf, bar none.

Price might be a factor as well, since you can find a lot of Nike boots in the $50 to $75 range, versus the $150 you’ll spend on a new pair of Copas. Then there’s aesthetics. Several veteran ballers we spoke to believe firmly that black is the only color for a soccer shoe, and the traditional palette is hard to come by in many of the newer Nike lines.

Adidas has made steps to brighten up its brand. We saw quite a few colorful Adidas boots out there from the Nemeziz Messi Line. And a new boot that’s generating a lot of buzz is the Adidas Copa Turf, available in brighter palettes.

Examining the outliers
It’s always fun seeing the single-vote getters in a survey. We already mentioned the one pair of Pelés we spotted. Most of the other outliers were imports from expat players. There was the white-hot Pantofolas sported by an Italian baller during league play at Manhattan’s Nike Field. Another head turner: the neon orange-accented Kipstas worn by a twentysomething Frenchman at a pickup match at Brooklyn’s Bushwick Inlet Park. “Where did you find those?” we asked. “Paris,” he answered. “You can’t get them here.”